A survey of 37 transport company managers and executives in 2009 revealed interesting patterns of dissatisfaction with the performance of South African border posts.

The respondents commented only on the borders used by their fleets and the survey was limited to the border posts on Botswana border (Skilpadshek-Pioneers Gate; Kopfontein-Tlokweng and Groblersbrug-Martins Drift) , Zimbabwe border (Beit Bridge), Mozambique border (Lebombo-Ressano-Garcia), Lesotho border, (Maseru Bridge) and Swaziland border (Oshoek- Ngwenya). The comments related to the South African side of each border.

The managers were asked to describe the major issues that contribute to increased costs and delays and their responses were categorised into nine specific areas of concern or comment.

The proportion of comments regarding each aspect of performance at the seven border posts is shown in the graph below. 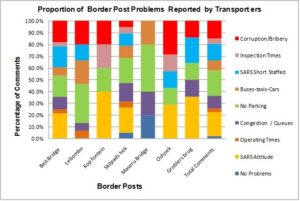 As shown in the table below, the three main concerns centred on SARS with 20.4% of respondents responding negatively about staff attitudes, 14.0% reported delays due to insufficient SARS staff for the traffic volumes and 15.1 % reported the prevalence of corruption and bribery.

21.5% of respondents said that infrastructure and parking was a serious problem at most of the border posts as the trade volumes have outgrown the facilities and the capacity of the authorities to process the volumes of freight vehicles. 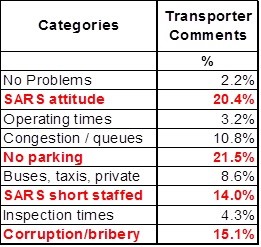 An interesting corroboration of the assessment of the managers and executives was provided by the similar survey that questioned  63 truck drivers at random at the various border posts.

The drivers tended to combine all problems with officials into several negative comments about SARS that recurred in 50,8% of responses. A further 23.8% of drivers complained about lack of infrastructure, congestion, lack of signage, and parking space.

The information from the survey reiterates the many negative comments made in reports on the inefficiency of South African  border posts, and the frustrations of the transporters using them.