It is widely recognised that the quality of driver training, and the level of competence is unsatisfactory in Southern Africa, when compared with international standards. The results are very evident in the accident and fatality statistics for the countries in the region, as shown in the table below. The data can be compared with fatality rates per 100,000 population in Australia (5.8) and in UK (2.7). 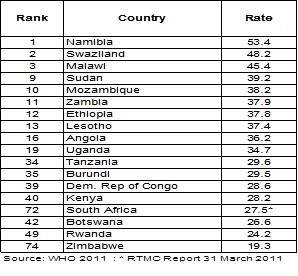 The standards of driver training in South Africa should be of great concern to the Department of Transport due to the fact that there are 12,000 fatalities per year on the countries roads. The proportion of accidents involving HGV and PSV drivers is also unacceptable with almost daily reports of truck and bus disasters.

The total movement of road freight in South Africa is estimated to be about 1.5 billion tons p.a.[2] , making it by far the most important mode of freight transport.  Approximately 180 million tons of road freight is transported annually by commercial transport on the national road corridors.

The N3 corridor between Gauteng and Durban is the busiest route for road freight, passenger coaches and long distance taxis. At Cato Ridge there are about 7,200 Heavy Goods Vehicle (HGV) movements per day and at Mooi River 5,800. There are approximately 600 HGV and PSV crashes per annum on the corridor, of which 80% are caused by human factors.

Recent research in KZN province includes a pilot study of long distance drivers at port of Durban[3], and the survey conducted by Durban Harbour Carriers in 2011[4], both confirm the inadequacy of the driver training and the poor quality of HGV driver applicants holding legal Code 14 (EC) licences. In addition, both studies reflect approximately 30% of foreign nationals amongst the drivers operating in Durban and the long-haul road transport sector. These research results confirm the study by T. Nkomonde at UKZN[5] in 2010.

The reasons for this poor state of affairs are patently due to the dual standards that currently prevail in the training of HGV and PSV drivers. There are two main streams of training;

From the abovementioned research, it appears that 60-70% of drivers currently active on the major freeways and urban areas are “enabled to drive” via the first of the abovementioned training processes and only receive comprehensive training if they have the good fortune to be employed by a firm large enough to send its drivers for training. It is also reported that the same situation prevails in most of the countries in the Southern African region[6]. The problem is mentioned in reports by University of Nairobi and University of Tanzania (BICO) as being in need of urgent attention. Kenya, Zambia and Tanzania have initiated national training solutions to improve the standard of training in collaboration with overseas consultants and Transaid, the UK based transport charity organisation.

The reasons for the abovementioned situation are very apparent;

a) New aspirants to the driving profession are not able to pay the fees necessary to sustain the commercial viability of a fully professional driver training school, with modern vehicles, teaching facilities and large premises.

b)  Most driver training schools are owned and managed by untrained individuals, mostly without the capacity to develop professional curricula.

c) There are numbers of foreign drivers who have received training by various means. (Zimbabwe drivers appear to be better trained than South African).

d) There are no sources of professional training available to individuals who may want to open driving schools.

e) Most driving schools are under-equipped in terms of vehicles and facilities.

g) The situation if further aggravated by the fact that driver trainees (licence applicants) are tested by traffic officers or police officers who have not been trained to drive commercial vehicles.

h) There are many illegal avenues by which to obtain driver’s licences.

i) There has been inadequate research into the deficiencies in the system and a lack of official support for professional training system development at all levels in the field of commercial transport.

The result of all these factors is large numbers of untrained, incompetent and badly managed drivers of HGV and PSV vehicles on the country’s roads. Most new drivers effectively learn by hit-or-miss experience along the roads of the country.

There are about 400,000 goods vehicles and possibly 50,000 operators, but unlike other transport modes and industries such as manufacturing and mining there is no entry qualification, no effective operator registration system, no nominated accredited competent persons and a largely ineffective Road Transport Quality System (RTQS); and to make it worse the standard of driver training is just as bad as the rest of the region.

In the 1980s, it was intended by the Department of Transport that development of the Road Transport Quality System (RTQS), would include effective Operator registration (the system was rendered ineffective by attachment to vehicle registrations);  the Certificate of Professional Competence ( the CPC courses developed at RAU have trained 40,000 people to date; but the CPC was not introduced)  the Professional Driver Permit (PrDP) was designed to provide a basis for addressing the need for professionalism in commercial drivers. (The PrDP was introduced, without a training requirement and has been in existence ever since without contributing effectively to the quality of professional driving).

South Africa’s accident experience where 12,000 people are killed per annum and accident costs are estimated to amount to R306 billion per annum[1], is aggravated by the failure to develop professional driving courses and to create avenues for testing and training of new applicants into the profession of commercial driver.

There is an urgent need for wholesale overhaul of the commercial transport regulatory systems in South Africa to achieve improved quality control, in line with the initiatives that are in progress in other parts of the region. Driver training is a key element of a transport quality system design; there are experts available, but the current institutional framework is a barrier to introducing professional training, while large amounts of money are spent on band-standing about “road safety”, advertising and public “education” programmes. Requests from road transport and other associations for engagement with authorities to assist in solving the problems by professional system development are ignored. Instead there is a continual focus on creating more legislation in spite of the inadequacy of current enforcement of the basic RTQS.

The accumulated funding from skills development levies and the budgets of road transport agencies, is more than adequate to initiate practical solutions to the problem. The extent of the carnage on the roads should be sufficient justification for urgent action by authorities to redress the deficiencies in the current systems, but inertia prevails.