The recent report of the United Nations Conference on Trade and Development (UNCTAD) showed that 43% of South Africa‘s trade was intra-regional in the period (1995-2000) but this has reduced to 15% in the period (2006-2011). Intra-regional imports during the same periods reduced from 21.6% to 6.8%[1]. At the same time Zambia-China trade volume has increased from US$ 100 million to more than US$ 3 billion.[2]

The two major maritime container import-export gateways into South Africa, the ports of Durban and Cape Town are facing massive land side logistics bottlenecks and currently experience chronic congestion and excessive waiting and delay time. At the same time capital expansion in the ports is all aimed at improving quayside efficiency, not landside.

With standing time per HGV combination costing over R300 per hour, the queues of over 400 vehicles for an average of four hours per load contribute more than  R 500,000 per day to overall logistics costs.  Transporters report that the numbers of containers handled per truck per day have reduced by 50% over the past 5 years as the ports grapple with a number of factors that reduce the throughput of containers. 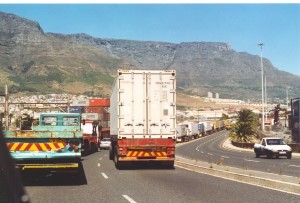 Truck staging at the Port of Durban

The current cost of receiving a container in Durban is approximately R9000 (once landed) and the cost of transporting the box to a depot is a further R1000, depending on distance. The cost of road transport of a container to a Zambian or DRC importer is approximately R110, 000, with the return load being slightly cheaper. A significant part of the cost of long haul road freight transport is the delay times at each border crossing of 18-25 hrs per load (R5000 – R7000 per border). The total delays at borders and weighbridges on a 3000 kms trip can amount to 5 days with the result that a R 1.6 million vehicle combination only achieves two round trips per month.

The issue of the excessive cost of delays and the need to improve logistics efficiency is the subject of recurring debate at almost every gathering of transport authorities and associations in the region, and has been for the last 15 years, and there have been some positive moves, but there is evidence that some aspects of the logistics system are clogging up as volumes increase.

In attempts at reducing the cost of transport, some transporters are resorting to overloading of return loads, mainly  minerals, (copper and cobalt) loaded into the empty containers. This is the likely reason that  the highest overloads recorded in KZN for each of the  past 3 years have been containers, with up to 20 ton overloads, heading to the port of Durban. No South African ports have operative weighbridges.

The 2012 State of Logistics survey produced by CSIR et al [3], made the following observations;

In South Africa the mantra is a return to rail freight, this despite the evidence of continuing switch of  bulk and break bulk cargoes to road such as timber, manganese, coal, steel, wheat, fertiliser and maize to road for lack of rail capacity. There are continual announcements of future planned mega new developments, but minimal evidence of intentions to fix what is not working.