Is it possible in the medium term?

The railway handles approximately 182 million tons per year of mainly block train consignments of primary minerals [ores, coal] and primary and secondary commodities such as timber, steel, grains, fuels, cement, containers and chemicals and smaller proportions of industrial outputs, imports and exports such as motor vehicles. The approximate annual volumes of commodities carried by the railway in 2005/6 is shown in the table below. The top seven bulk commodities account for 95% of total annual volume. 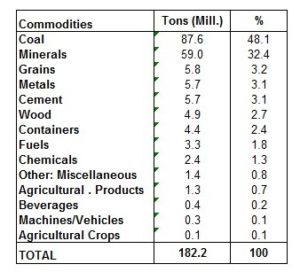 Road transport on the major corridors and main provincial arterial routes amounts to approximately 180 million tons of a wide range of commodities including fuels, containers, industrial goods, consumer and household products, refrigerated cargo, fruit, grains, livestock, fertiliser, motor vehicles and chemicals. In addition to the corridor traffic there are much larger volumes of goods transported by road for shorter distances in urban and rural areas.

The proportion of long-haul road freight is growing from year to year with increasing usage of road haulage for primary and bulk commodities due to speed, convenience, security and lack of rail capacity to handle general freight .

The historical development of the land freight market from 1949 to 2007 is shown in the diagram below.

As shown above, the development of the coal export line to Richards Bay (Coallink)and the iron ore export line to Saldanha (Orex) led to reallocation of the available railway capacity and rapid reduction in volumes of general cargo.

As shown in the diagram above , long haul road freight developed slowly as the competition between rail and road was largely controlled by the Road Transportation Act until the 1980s. After the recommendations of the National Policy Study (NTPS) deregulation of road and rail freight led to repeal of the Act. In addition the dimensions and legal axle mass loads of road vehicles was increased in 1993 making road haulage rates more competitive. Road freight volumes increased very rapidly as the road haulage industry challenged the railways with enhanced door-to-door service for high value cargoes.

The changed emphasis of the railway mandate by the government, as sole shareholder requiring it to act competitively, forced a change of strategy. This included focusing on the major customers and downsizing the station-to station and general cargo capacity by scrapping stations, sidings, locos and wagons ,as well as concentrating the services on bulk haulage of primary products. Railway capacity stabilised at about 180 million tons some 15 years ago and the growth in land freight volumes as the result of economic growth since then, has been serviced by the road freight industry.

In the 1983 the railway had about 180,000 wagons and about 4000 operative locomotives and carried the volumes shown in the table above. Due to the reduction of general cargo and increased efficiency, the railway now carries approximately the same tonnage using 80,000 wagons and 2500 locomotives. Capital restrictions have constrained purchases and led to continual cannibalisation and repairing, so that a large proportion of the loco and rolling stock fleet is outdated and in need of upgrading or replacement.

The growth in road transport volumes on the major national and provincial corridor routes from 1996 to 2007 is shown in the table below. The growth over the ten year period has been approximately 316%. 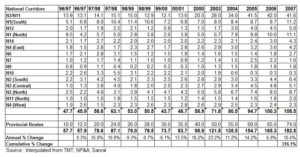 (NB: Some routes and years data interpolated between available figures).

It is noteworthy that the recessionary conditions of the past two years have resulted in reductions of road freight volumes on the main corridors, but as and when the economy recovers the road usage will no doubt resume the increasing trend..

There is continual debate about competition between road and rail transport, and at national level, a stated official intention to reverse the trend towards increasing volumes of road freight transport. In evaluating the potential for achieving the objective of shifting a significant tonnage from road to rail it is necessary to appreciate that the current situation is the logical outcome of policy decisions taken by the government over the past 20 years, and reversing the process will require some very careful planning decisions in the future.

Some specific aspects of the present modally skewed situation can be identified; current volumes of bulk mineral traffic on the N2 corridor to the north of Richards Bay are estimated to be more than one million tons per year and timber a further 500,000 tons. Bulk tipper traffic on the N3 amounts to about two million tons of cargo to and from the ports. Industrial coal deliveries all over the country are done by road, even where there are rail sidings. The logistics of containerised cargo is complicated, but there is some scope for additional use of rail. In the longer term, with massive reinvestment there may be potential for shifting more of commodities such as fertiliser, maize, cement, coal, timber, steel, wheat and motor vehicles.

The decision to retain state control of railway operations has led to effects beyond the control of the railway management that include, inter alia, capital restrictions, political appointment of staff and skills attrition. The insulation from competition and concentration on rail-captive bulk freight has reduced the capacity and the necessary facilities to engage in the highly competitive general industrial cargo market. These conditions will be difficult to reverse in the medium term. It is also important to realise that the potential for promoting such a modal shift is largely confined to a proportion of the 180 million tons of long-haul cargo on road as very little of the one billion tons of short-haul road freight is likely to be attracted to rail.

The escalating usage of the roads by freight transport over the past twenty years has led to exponential wear and deterioration relative to the design capacity and life of the pavements.

This has been caused by a number of factors which must be carefully noted for their relative importance in the overall costs of maintaining and rehabilitating the roads. The major causes of the current deficits in road maintenance are :

a) An extended period of reduced and sub-standard maintenance due to budget and funding constraints as the result of reprioritising budget allocations.

b) Road freight traffic growth of more than 500% since the 1960s when most of the roads were built.

d) The wholesale switch by the trucking industry from cross-ply to steel radial tyres that increase point loading by over 50% compared to cross-ply tyres.

e) Increased import (wheat, maize, soya) and export (ferrochrome, manganese, granite) of commodities that allow road freight operators to coordinate backhauls from the ports and by taking advantage of the increased weight and cubic capacity of road vehicles to offer rates that are competitive with rail for many bulk commodities.

g) Delays in pipeline construction that have resulted in 2 million tons per year of long haul fuel transport by road.

h) Overloading of road freight vehicles amounts to 30% of vehicles weighed in some areas, but most “overloads” relate to the 56 tons GCM regulation, not axle mass loads, and relatively few large long haul vehicles exceed the permissible legal axle mass load (LAM). The figure below illustrates the analysis of 185,544 loads weighed at all weighbridges in KZN in 2006. 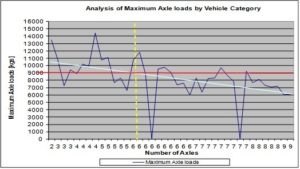 The vehicle load data have been arranged by ascending numbers of axles and vehicle combination carrying capacity and the average maximum axle load is shown for each vehicle axle category [dark blue line]. The maximum-recorded mass by vehicle category was divided by the number of axles to give an indication of the average axle loading for the heaviest axles in each category. (The average axle weights of each category would be lower, but were not shown in the annual report and this information was not supplied in the 2008 and 2009 reports).

This illustration shows that (1) there is in fact a high level of voluntary compliance with the legal axle mass loads amongst operators of long-haul vehicles, (2) that more severe overloading of axles occurs in short-haul and rigid vehicles (as predicted in the abovementioned studies) and (3) the largest proportion of operators are responsibly aware of their duty to protect the roads. There is however a need for much more effective and better planned load enforcement as there are still numbers of less responsible operators intent on profiting from the potential provided by overloading. It is noteworthy that the heaviest overloads in KZN in 2008 and 2009 (up to 80 tons GCM) were long distance imported commodities in containers from over the border, apprehended in KZN after by-passing or avoiding apprehension and travelling over 1000 kms on SA roads.

It is unfortunate that the excellent annual reports compiled by CSIR and KZN:RTI and a few other toll road operators are not produced by all the other enforcement agencies. The inadequate available data adds to the inability to realistically quantify the damage caused by overloaded trucks. The importance of overloading control is generally conceded, but it is considered by most roads maintenance experts to be an additional factor to be considered in the overall wear and tear of the roads, not the primary cause of the current general deterioration.

The motivation for the need to transfer freight from road to rail is usually quoted as the fact that funds to maintain roads at current utilisation levels, are not available (unless fuel taxes are to be diverted from other social objectives). The current fee structures of toll roads result in subsidisation by private motorists, of the industries that are the commercial users of freight transport, not the road carriers, as they pass on all such costs to the clients.

It must be recognised that freight transport is an integral and essential part of the industrial supply, production and distribution activities of commerce and industry, so significant increases in charges for use of the roads by whatever means, will necessarily have inflationary impacts on economic activity, employment and international competitiveness. It is also noteworthy that if an alternative rail freight strategy is not more cost effective than road haulage it will have the same effect.

Modal Shift as a Solution to Road Costs

The potential for modal shift as a solution to the increasing costs of road maintenance in the medium term is limited to the commodities that are currently transported by road over distances greater than 400 kilometres. The road surveys of major corridor traffic that were performed in the period up to 2007 gave clear indications of where the potential lies for planning effective strategic action, but these have been largely discontinued and most available road freight volume information is becoming increasingly dated.

For the future sustainability of the South African freight transport system it is imperative to analyse the real situation in relation to various industries and their transport requirements in order to identify where there is potential for attracting cargo to rail. The evaluation process must be based on realistic assumptions in terms of the service levels that can be offered on rail and the rates that will apply. It is not possible to make arbitrary business decisions for the industrial users of freight transport. There is some potential for modal shift but it is limited, except for a few major corridors, and is unlikely to be sufficient to make a material difference to the overall cost of roads in the foreseeable future.