There have been a considerable number of public announcements about the potential and possible future development of rail freight and passenger services between Gauteng and Durban. Many of the statements do not offer sufficient information for the public to appreciate the implications of the various statements that are made.

There is urgent need to examine, analyse and evaluate many pertinent facts about the railway situation as a basis for debate and planning. The intention of this article is to provide some comparative data between rail and road and to examine the issues regarding rail and passenger services on this route.

Length of the Freight Routes

The length of the Natcor mainline rail route is approximately 730 kms of double track –electrified lines at   3 kV DC. The length of line between Union in Gauteng and Durban is 698 kms.

The road route length is 580 kms along the  N3 Corridor, much of which is a 4 lane tolled highway.

Road Freight on the corridor was approximately 42 million tons in 2007 with possibly 28 million tons travelling the whole length of the route. This reduced somewhat during the period 2008-2010 and is increasing again. The route is also heavily used by passenger traffic.

Trains run at average speeds of 40-60 kms per hour but scheduling required stops to permit passing and to allow for headway between trains. Average overall train time over the Natcor route is between 12 and 14 hours i.e. 50 kms per hour.

Road freight vehicles are theoretically limited to 80 kms per hour and the actual average travel speed for a loaded 56 tons combination on the Durban to Gauteng route is approximately 60 kms per hour.

Freight trains are typically compiled into 50 x 40 ton wagon trains with 2-4 locomotives as required for the gross train weight, and dependent on locomotive specifications. Gross train weight is about 4000 tons and payloads are therefore about 2000-3000 tons per train.

Road freight vehicles are limited to 56 tons GCM giving a maximum payload of about 38 tons. The average payload is typically about 28 tons and about 15% of the vehicles travel empty.

There have been several announcements about the “need “ to switch the rail gauge in South Africa from “Cape gauge” (1067 mm) to “standard gauge” (1435 mm). The implications of such a move are the subject of much debate in official circles. The assumed advantage of higher line-haul speed may have some benefits, if not negated by the other systemic delays.

The implications of reducing the geographic coverage and flexibility of the  rail services will however be almost universally negative in relation to the objective of providing a service that can be as flexible and competitive as road haulage. Some of the major factors that bear consideration in the rail gauge debate, include the following.

There are continual reports of current problems with delayed capital expenditure, deferred maintenance, skills deficits, uncompetitive rates and unsatisfactory service of freight railways. The introduction of a further complication in the form of a gauge change seems likely to aggravate , not resolve any of the problems.

On the question of mixing freight and high speed passenger services on the Durban-Gauteng route the following considerations are relevant.

Passenger Rail on the Gauteng-Durban Corridor 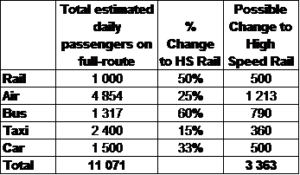