The changing dynamics of the container trade worldwide are evident in the statistics the port of Durban. As shown in Figure 1 below, the increase in container growth was very rapid between the period 2003 and 2008 but this has now slowed significantly due to the worldwide recession, the depressed economic conditions in South Africa and the reducing amount of break-bulk being converted to containerised cargo. 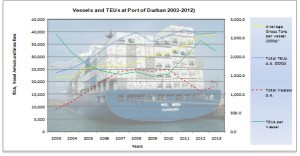 The trend in growth of vessel size is interesting, as call sizes in TEUs per vessel reduced from 2004 to 2010 and have now recovered to equal the average in 2003. Average call size has changed over the period, as shown in Figure 1,  but analysis of the annual averages using the cusum technique shows that despite a spike in 2012, call size has remained relatively constant over the past 10 years in the range 1500 – 2400 TEUs per call as shown in Figure 2 below.

The number of container ship arrivals increased between 2005 and 2010 but numbers are now decreasing as shown in Figure 1. The current situation is that relatively larger ships are delivering approximately the same numbers of boxes at each vessel call. 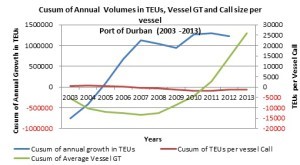 These trends in the statistical data released by Transnet National Ports Authority, give clear indications of the difficulties being experienced by the port authorities in trying to accommodate changing trends, with a need for deeper berths, longer berth space, and the problems of fitting longer vessels into the port’s somewhat inflexible wharf structure. In addition, the back-of-port logistics becomes increasingly complicated when it is necessary to juggle vessels to accommodate the mix of small vessels and large ones, which with space for moorings, often need two berths for one vessel.

The management problems are also exacerbated, not only by the berth lengths, but by the fact that the current layout does not allow efficient allocation of cranes around the total berthing area as they are necessarily locked into the segmented berth geometry and often cannot be allocated to match ship requirements. The use of two different landside transport options, straddle carriers (SCs) at Pier 2 and mafi trailers and rubber-tyred gantries (RTGs) at Pier 1   compounds the stacking problem when containers are transhipped from one Pier to the other. 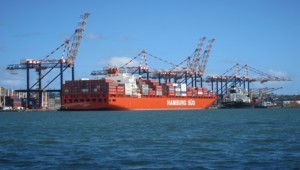 The annual average number of container vessels reduced to 1226 p.a. in 2013 and it  would be relevant to examine the frequency of arrival of different call sizes (numbers of TEUs landed and shipped per vessel), but this information is not readily available. As a basis from which to examine the implications of call size Figure 5 shows an estimated distribution pattern of different call sizes and number of vessels per week, using a normal distribution around the average call size. 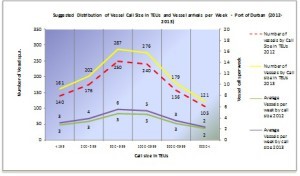 All of the foregoing, underscores the urgent need for reorganisation, acceleration of the capital plans to improve berth layouts, and the pressing need for research into the options for increasing efficiency of the back-of-port logistics as a means to optimise infrastructure usage, improve vessel turnaround times and reduce port logistics costs.

The port throughput and terminal handling capacity and methods has major implications for the road transport industry that services the import-export container industry as well as for the eThekwini  Metro in terms of road usage and congestion around the port.