There are increasing concerns regarding the standard of driver training in South and Southern Africa as reported by South African transport operators and confirmed by the recent research project by TMSA in the ESA region. This is confirmed by contacts in Tanzania, Zambia and Kenya[1].

A pilot survey of drivers operating around the port of Durban, 94% of whom had travelled via the long distance corridors from the interior, yielded an interesting profile of the driver population in the area, and the means by which they have been trained.

The survey conducted in the port precincts on the 3 February 2014 by the field researchers, W. Gcwensa and J. Chifakacha, who recorded information from 38 heavy goods vehicle drivers. The results of the survey were analysed by R. Sookream, yielding the following observations. The survey form used, is shown in Appendix A. 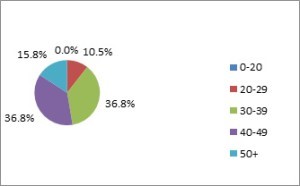 2.5 Country in which Learning Took Place

47.3% of the drivers said that they learnt to drive from family members and friends (18) and 20 said that they were taught by a driving instructor (52.6%)

29.7% (11) drivers said that their training had been purely practical instruction on how to drive a vehicle; 5 (13.5%) of drivers reported having had practical and theoretical training whilst 21 (56.8%) said that they had received no formal training apart from learning to drive a light vehicle.

The findings of this brief pilot survey show that there is a very high proportion of foreign drivers operating in the South African goods transport industry. It is apparent that a large proportion of the drivers are in the 30-60 age bracket, with minimal numbers of younger drivers apparently being trained into the industry. It is clear from the survey that a large proportion of the drivers received their initial training by adhoc learning from friends, relations, or in some cases local “driving schools”.

A larger proportion of Zimbabwean drivers than South Africans, reported having received additional training subsequent to learning to drive. 56% of drivers reported having had no formal training, 13% reported having received practical and theoretical training and 29.7% said that they had only received practical training on how to handle a vehicle, with no theoretical grounding. It is noteworthy that all drivers who said that they had attended additional courses were sent for training by their company, after they had been driving for some time and had been hired as “professional drivers”. Many drivers made ad hoc comments about problems of long driving hours, fatigue, lack of facilities and pressure by company management to work to “targets” in order to increase earnings. From all of the foregoing, it is possible to confirm that the current state of driver training and induction into the transport industry is unsatisfactory and it can be noted that the situation in South Africa is approximately the same as the other countries of the Southern African region as established in the recent TMSA – Tripartite project.